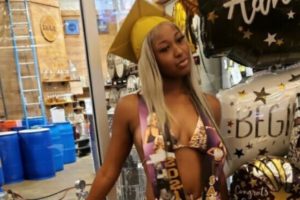 A Louisiana mother is suing a restaurant in New Orleans after they decided to call the cops on her teenage daughter for wearing a bralette top to her graduation dinner.

La Shawn Butler accuses Lula Restaurant Distillery of discriminating against her 17-year-old daughter Sanai Butler for wearing a bikini top, NOLA reports. La Shawn claims the restaurant tried to “weaponize” their daughter by calling the New Orleans Police Department after one of the owners didn’t like the top Sanai was wearing.

It was in late May when the Butlers and 28 of their loved ones went to Lula after Sanai graduated with honors from Warren Easton Charter School. The family came together to celebrate Sanai’s high school achievements and the teen planned on announcing that she would be attending Talladega College in Alabama.

However, the momentous occasion was overshadowed after the restaurant called the cops on the family following complaints about Sanai’s shirt, Newsweek reports. Cops received a call about a “female’s attire” and arrived at the scene.

La Shawn claims that the restaurant had no dress code on its website or displayed inside, and alledges that staff told her relatives over the phone that they could “come as you are.”

“This is a child at the end of the day—if you had something to say about her outfit, you could’ve approached me as her mother,” La Shawn said at the time.

Now after calling the cops on her college-bound daughter, La Shawn says Lula embarrassed and discriminated against her daughter, which led to her seeking treatment from a clinical psychologist.

“The conduct of the owners of Lula was extreme, outrageous and intentional,” the lawsuit issues out by Bagneris Law Firm on July 1 said. “As such, they are liable for the emotional distress they caused (the Butlers) to suffer.”

The restaurant has not released a statement but previously claimed the cops were only called after “a verbal altercation” involving “three disruptive, adult patrons” took place. Lula also apologized to “any person who (felt) that Lula discriminated against them based on their attire or race.”

The Butlers noted how the incident took place one year to the date when George Floyd was murdered by Derek Chauvin in Minneapolis.

“None of us should live in fear that the police will be weaponized against us,” the family said.

Monster Hunter Stories 2: Wings Of Ruin Review – My Monstie And Me