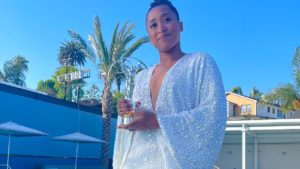 Disgraced former anchor on Fox News and NBC, Megyn Kelly, trolled Naomi Osaka and got curbed when the tennis star blocked her on Twitter because she was “spewing negativity.”

Kelly, who recently picked a fight with Nikole Hannah-Jones is now taking jabs at Osaka over her magazine covers, gracing Vogue Hong Kong and even Sports Illustrated and Time ahead of the 2020 Olympics.

Kelly, who seemingly doesn’t have a clue that magazines plan months and even years ahead of publication, decided she wanted to come for Osaka and play down her mental health issues after Osaka admitted that she suffers from debilitating anxiety that caused her to opt out of playing in the French Open because she didn’t want to face the demands of answering to press.

On Monday, Kelly was talking about Osaka on Twitter with Clay Travis, a conservative sports pundit.

“Since saying she’s too introverted to talk to the media after tennis matches, Naomi Osaka has launched a reality show, a Barbie, and now is on the cover of the SI swimsuit issue,” Travis tweeted.

“Let’s not forget the cover of (& interview in) Vogue Japan and Time Mag!” Kelly added.

Osaka got wind of Kelly’s insensitive comments and clapped back in a since-deleted post and wrote,  “Seeing as you’re a journalist I would’ve assumed you would take the time to research what the lead times are for magazines, if you did that you would’ve found out I shot all of my covers last year,” Osaka said.

“Instead your first reaction is to hop on here and spew negativity, do better Megan.”

Late last month, Osaka bowed out of the French Open to focus on her mental health.

“I think now the best thing for the tournament, the other players and my well-being is that I withdraw so that everyone can get back to focusing on the tennis going on in Paris,” she wrote in a statement. She also stated that some members of the media have “no regard for athletes mental health,” adding that it “rings very true whenever I see a press conference or partake in one.”

After Kelly got blocked she tweeted a salty message:

Poor @naomiosaka blocked me while taking a shot at me (guess she’s only tough on the courts). She is apparently arguing that she shot her many covers b/4 publicly claiming she was too socially anxious to deal w/press. Truth is she just doesn’t like Qs she can’t control. Admit it. pic.twitter.com/izyRzOrUVm

Kelly’s former Fox News show was canceled in 2018 after she comments she defending blackface.

Monster Hunter Stories 2: Wings Of Ruin Has Shipped Over One Million Units Worldwide