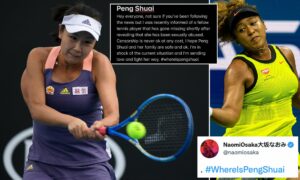 According to First Sportz, tennis phenom Naomi Osaka‘s social media account with Weibo was censored after she posted concern for tennis pro Peng Shuai after she was reported missing following her accusations against retired Vice Premier Zhang Gaoli.

Based on a report by CNN, the 35-year-old Shuai, who is a former Wimbledon and French Open doubles champion, accused retired Vice Premier Zhang Gaoli of pressuring her to have sex. Screenshots posted on her account on Weibo, China’s Twitter-like social media platform, were ultimately deleted.

Osaka posted a similar message of Shuai’s disappearance on her Twitter account, which was ultimately deleted as well.

“Hey everyone, not sure if you’ve been following the news but I was recently informed of a fellow tennis player that has gone missing shortly after revealing that she has been sexually abused. Censorship is never OK at any cost, I hope Peng Shuai and her family are safe and OK. I’m in shock of [sic] the current situation and I’m sending love and light her way. #whereispengshuai”

It was also reported that the comments on Osaka’s latest post on Weibo have also been disabled as the last one was unrelated to Shuai.

The original Weibo post that Shuai posted with the accusations was taken down before anyone heard from Shuai. And because of that, she was thought to be missing until she made an appearance recently to show that she was not in distress.

Over the weekend, according to CNN, a steady stream of photos and videos showed Shuai acknowledging that she was fine and alive. There have been doubts about her being OK because the social media postings that have been displayed have all been from individuals working for Chinese government-controlled media.