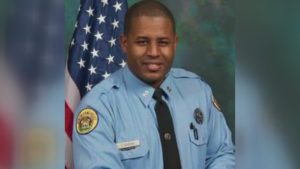 A police officer with the department for 13 years was fatally shot over the weekend while he was out dining in Houston.

The police officer, who was based in New Orleans, was identified as Everett Briscoe. According to WBRZ, Briscoe was out of town on vacation. He was killed in Texas over the weekend by armed men trying to rob diners at the restaurant where he was dining. A second man was injured in the gunfire as well. The second victim, who was wounded in the shooting, was identified as Dyrin Riculfy.

The shooting took place on Saturday evening at the Grotto Ristorante on Houston’s Westheimer Road in the Galleria area. Briscoe was shot while sitting in the restaurant’s patio area. Witnesses stated that two armed men approached the group of diners and demanded their possessions. Although the group complied, one of the armed robbers opened fire, and the two victims were hit.

I am extremely heartbroken about the death of my dear friend and brother Detective Everette Briscoe who was killed while off-duty in Houston, Texas. I am praying for the family of Det. Briscoe and for the family of the second victim in this incident.

I want to thank @houstonpolice Chief Troy Finner for his strong words of support during this time.
I would also ask that you pray for the #NOPD family as we begin to understand the enormous loss we have suffered.

Detective Briscoe was a great officer and an even better friend. We will miss him dearly.

The Houston Police Department has released surveillance photos of the suspected gunmen and the vehicle they were driving.

UPDATE: Surveillance photos of 2 black male suspects and wanted vehicle, a silver/gray Nissan Altima with paper tags. They are wanted in this fatal shooting of an off-duty @NOPDNews officer.

Please call HPD Homicide 713-308-3600 with info or give tip for reward to @CrimeStopHOU https://t.co/Xatung6LDN pic.twitter.com/jBFhsK82yC