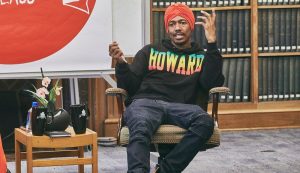 Nick Cannon said it’ll be God’s grace to bless him with more children. But Black Twitter wants the Pied Piper of baby-making to leave God out of it.

After welcoming four children in the last year, the multifaceted comedian is still depending on God for more kids. TMZ recently caught up with the Wild N’ Out creator and asked if he had any plans to have more children.

“God willing, man,” Cannon said with a smile. “You see it, if God sees it that way, then that’s what I’mma keep doing.”

However, despite all the money he makes, not everyone was on board with Cannon bringing more children into the world that he wouldn’t be a present father to.

“Sounds like he is willingly creating broken homes,” one user said. “He is. Kids need present parents, not deposits,” someone said in response.

In December 2020, Cannon welcomed his daughter Powerful Queen with Brittany Bell, with whom he also shares a son, Sagon.

Cannon’s eldest two kids are 11-year-old twins Monroe and Moroccan, whom he welcomed with his now ex-wife Mariah Carey.

Cannon’s seven children with four different women haven’t come without public scrutiny. During his appearance on The Breakfast Club, Nick “No Condom” Cannon shut down speculation of him not being a present father to all seven of his kids.

“Time is a man-made construct,” he said. “Anybody who knows me … I’m at every basketball game, every martial arts practice, and people don’t understand how I do it, but my children are my priority. It’s all about being present.”

Uncharted's Amy Hennig And Gary Whitta Are Working On Forspoken