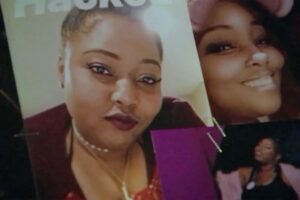 A pregnant woman was shot and killed along with her unborn child in Pennsylvania over the weekend.

In an incident that is eerily similar to an incident that happened in New York, a pregnant woman leaving her own baby shower was shot multiple times in the head and stomach while returning to her home in Philadelphia.

According to The New York Post, police officials in Philadelphia have reportedly questioned someone in the fatal shooting of a pregnant woman and her unborn baby. The woman, Jessica Covington, who was 32 years of age, was seven months pregnant.  She was shot several times in the head and stomach when she was unloading gifts from her car after coming back home from her own baby shower on Saturday.

NBC Philadelphia has reported that there is a $50,000 reward being offered leading up to the arrest of the person who gunned down Covington and her unborn child. She was killed just steps away from her home on the 6100 block of Palmetto Street around 8:30 p.m. Saturday when a gunman opened fire.

Covington was then rushed to Einstein Medical Center where she was pronounced dead along with her unborn child a few minutes later.

“Last night’s murder of a pregnant woman and her unborn baby is absolutely heartbreaking,” Police Commissioner Danielle Outlaw said. “While this attack appears to have been targeted, we will not rest until this obviously dangerous individual is in custody. I am pleased that the Mayor has increased the reward for the arrest and conviction of the perpetrator to $50,000.”

Philadelphia is reporting a greater number of homicides after one of the deadliest years in 2020. As of this week, there have been at least 496 murders that have been reported in Philadelphia in 2021, which is a 14% increase from last year.

“Soon, we will reach, and almost certainly surpass, 500 homicides in our beautiful city,” Outlaw said. “This unconscionable loss of life is almost too much to bear. On its own, 500 lives cut short is a staggering number. But whatever the final total, what this number can never truly show are the thousands of other lives impacted by sudden and tragic loss. The Philadelphia Police Department will continue to work with our local, state, and federal partners and other stakeholders to get ahead of the violent crime that is plaguing our beautiful communities.”