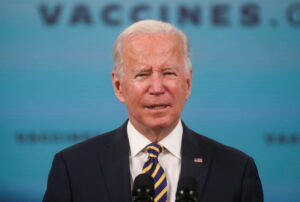 Thirteen Republicans helped push the bill over the line as the final vote was 228-206. Six Democrats, all progressives, warned they would sink the infrastructure bill if it moved ahead without the separate economic package and voted against the bill.

The bill, which now heads to Biden’s desk, was passed by the Senate in August but has been stalled in the House as Democrats argued back and forth, including Biden placing calls to progressive Democrats in an attempt to get their support in the final hours.

The legislation will distribute more than $550 billion in federal investments for roads, bridges, mass transit, rail lines, airports, and waterways. The package also includes $65 billion in broadband internet upgrades and billions more toward improving the U.S. electrical grid and water systems. Another $7.5 billion will be used to build a national network of electric vehicle chargers.

Going into Friday, House Speaker Nancy Pelosi said she wanted to vote on both the infrastructure and the Build Back Better (BBB) Act; however, she later indicated that the infrastructure bill would move forward after pushback from moderates that the BBB Act needs an official cost estimate from the Congressional Budget Office (CBO).

House Budget Chairman John Yarmuth told CNN the CBO cost estimate will take between 10 and 14 days and probably wouldn’t be ready until the week before Thanksgiving, although it may not be released until Thanksgiving week.

However, some politicians aren’t waiting for the CBO cost estimate. Rep. Carolyn Bourdeaux (D-Ga.) tweeted she is not against voting for Biden’s BBB Act, and the CBO estimate is not a red line for her.

“There are a lot of rumors swirling. Let me be clear — this bill is paid for and it has a number of my priorities in it. If it comes to the Floor today — I will support the Build Back Better Act,” Bourdeaux wrote.

Progressives and moderates have been fighting and bickering since Biden entered the White House. Before Friday’s vote, Democrats were forced to twice delay a vote on the bill due to demands from progressives.  The issues have forced Biden to get involved, visiting the Hill twice to rally Democrats, but that has not resolved the infighting.