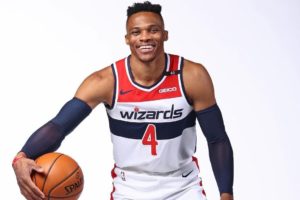 Although no official announcement for any National Basketball Association (NBA) transaction can be made before the salary cap becomes official on August 6, there have been reports that a blockbuster trade has taken place involving one of the league’s brightest stars.

According to NBA.com, the Los Angeles Lakers and the Washington Wizards have completed a trade that could potentially place the Lakers back in the championship realm after a disappointing 2021 season. The Wizards have reportedly traded all-star point guard Russell Westbrook to the Lakers in exchange for Kyle Kuzma, Kentavious Caldwell-Pope, Montrezl Harrell, and the 22nd overall pick of the recent 2021 NBA Draft. The Lakers will also receive second-round picks from the Wizards in 2024 and 2028.

The star 32-year-old point guard who has averaged a triple-double for the fourth season, an accomplishment that only one NBA player, Hall of Fame guard Oscar Robertson has done in league history, took to Twitter to thank the DC team and fans for welcoming him with open arms.

Thank you DC! You welcomed my family and I with open arms from day one. Everyone from the front office, to the training staff, the coaches, my teammates, and the fans. I’m grateful y’all took a chance on me and supported me every step of the way. pic.twitter.com/wTvHQHPIOU

I’m blessed to have been a part of such a stand up organization. It didn’t take long to make a home in DC, and I will forever be grateful and appreciative of my experience with the organization. Thank you! #thedistrict

The trade brings Westbrook back home to the Los Angeles area where he is a native. The new Lakers player also played at UCLA (The University of California, Los Angeles ) where he led the team to two Final Four appearances.

This trade gives the Lakers a “Big 3” as Westbrook will be teaming up with LeBron James and Anthony Davis who made a combined 34 All-Star appearances. Westbrook is the league’s career leader in triple-doubles with 184. This addition should elevate the team back to championship aspirations as Davis had suffered a strained groin in the first round against the Phoenix Suns, which forced him to miss all but 25 minutes of the final three games in the Lakers’ 4-2 series defeat.

Meet The Quirky Alien Enemies In No More Heroes 3