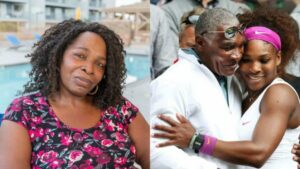 In the wake of her sisters’ tribute to their father, Richard Williams‘ eldest daughter Sabrina Williams is penning a tell-all telling a much different story than Venus and Serena‘s film.

The 57-year-old was the first born child from Richard’s first marriage to Betty Johnson. Sabrina has been very vocal and open about how her mother struggled to provide for her and her four younger siblings – Richard III, 56, Ronner, 55, Reluss, 54, and Reneeka, 49 – after their father left.

“Truth be told, [Venus and Serena] rose to the top while his other children had to suffer because of the choices my dad made,” Sabrina tells The Sun, “we were raised in poverty after he left.”

Upon marrying the tennis megastars’ mother Oracene Price, Richard became an active father to his second wife’s three daughters from a previous relationship.

One of those daughters, Isha Price, also served as an executive producer on King Richard along with Venus and Serena, and is credited with getting the family to greenlight the project.

Sabrina previously criticized the movie for failing to even mention Richard’s first marriage or his eldest children. She remains reluctant to watch the film.

“There’s a part of me scared to watch it because it may make me angry, upset or sad,” she says. “To be truthful, I don’t want to re-live what’s been happening for the last 40 years and see it flashing on the screen, even if it’s just for a second.

“I don’t want any of that, I don’t want to get sad,” she adds. “I’ve dealt with those emotions. Why am I going to torment myself by trying to do that, again? I’ve already been tormented in my mind. It’s now just time for me to keep moving. I don’t need to entertain it.”

The eldest Williams has written about 30-pages of her memoir so far. Her goal is to finish the book by June 2022 so she can begin the search for a publisher to get her story to readers.

“I dare anybody to come up and tell me that I’m taking the light away from this movie when, all I’m trying to do, is find good from a deadbeat dad,” she says of her literary debut.

Ashanti Opens Up About Re-Releasing Her Debut Album, "You Pay Your Dues, And Things Are Supposed To Come Back To You'