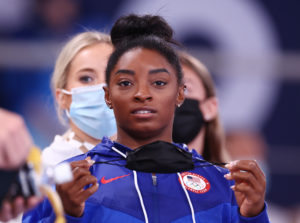 In what seemed like the most trying week of her career, superstar gymnastic GOAT Simone Biles caught a case of the “twisties,” and pulled out of several Olympic competitions to tend to her mental health before she finally conquered the balance beam and secured a bronze medal during the Tokyo 2021 Olympics.

And to add insult to her injured soul, Biles was peppered with hate by some who thought she was punking out on the international stage by opting out of competing. But in the midst of it all, supporters swooped in to fill her heart with words of love, support, and encouragement.

But as if that wasn’t enough, Biles received the devastating news that her auntie on her father’s side “unexpectedly passed,” according to People.

“That was another one, I was like, ‘Oh my God. This week needs to be over,’ ” Biles’ coach Cecile Canqueteau-Landi,” said. “I asked her what do you need.

“And she said, ‘I just need some time.’ I said, ‘You call me, text me if you need anything I’ll be here. Whatever that is.’ She called her parents. She said, ‘There’s nothing I can do from over here. So I’m just going to finish my week and when I get home we’ll deal with it.’ “

It has been quite a tough week for the 24-year-old champion.

Biles’s decision to remove herself from the finals came after her shaky performance on the vault. Last Thursday, Biles credited the mishap to a case of the “twisties,” the New York Post reported.

“Literally cannot tell up from down,” Biles said. “It’s the craziest feeling ever. Not having an inch of control over your body. What’s even scarier is since I have no idea where I am in the air I also have NO idea how I’m going land or what I’m going to land on. Head/hand/feet/back.”

The four-time gold medalist has said her exit is to focus on her mental health, something many are praising her for, while others criticize the decision.

Last week, shared a tweet thanking her fans and supporters.

“The outpouring love & support I’ve received has made me realize I’m more than my accomplishments and gymnastics which I never truly believed before,” Biles wrote.

We wish Biles some much better days ahead.