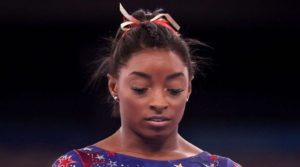 Simone Biles will not participate in the individual floor exercise at the Tokyo Olympics, according to USA Gymnastics. Britain’s Jennifer Gadirova will replace Biles in the floor final on Monday since there are no additional U.S. gymnasts qualified for the floor exercise.

Biles withdrew from the team gymnastics final last Tuesday, citing mental health reasons. She revealed that she was dealing with a phenomenon in gymnastics called “the twisties“. Athletes have shared how “the twisties” can be very dangerous, causing a gymnast to lose their rhythm and not comprehend where their body is in the air in relation to the ground.

USA Gymnastics stated that Biles will be “assessed daily to determine medical clearance for future competitions,” according to a statement released to PEOPLE early last week.  There’s still a chance that Biles will compete in the balance beam event that is scheduled for Tuesday.

“Simone has withdrawn from the event final for floor and will make a decision on beam later this week,” USA Gymnastics announced on Twitter Saturday night. “Either way, we’re all behind you, Simone.”

Simone has withdrawn from the event final for floor and will make a decision on beam later this week. Either way, we’re all behind you, Simone.

Simone Biles’ withdrawals from the team competition and individual events at the Tokyo Games has stirred up intense debate on social media.

The elite gymnast faced criticism from many who believed that she was letting Team USA down. However, there was also an outpouring of support for Biles’ from those who respected her decision to prioritize mental health.

Former gymnast Sean Melton suffered from severe twisties during his entire career. He stands by Biles’ decision to withdraw, explaining to the Washington Post how unsafe it could be for a gymnast to continue performing when they are experiencing a mental block.

“Simply, your life is in danger when you’re doing gymnastics,” Melton told the Washington Post. “And then, when you add this unknown of not being able to control your body while doing these extremely dangerous skills, it adds an extreme level of stress. And it’s terrifying, honestly, because you have no idea what is going to happen.”

Biles performance last Sunday was her sign to slow down. She planned to perform a 2 ½ twisting vault, The Washington Post reported. Instead, she only executed 1 ½ twists and stumbled. She scored 13.766, representing the lowest Olympic vault score of her career.

Biles’ withdrawals were shocking to many, including her teammates. In 2016, the U.S. superstar gymnast won gold at the 2016 Rio de Janeiro Olympic Games. She made history by winning four gold medals. Now, Biles is cheering her team on as they vie for medals at the Tokyo Olympics.

Chic Functional Furniture to Make the Most of Your Space