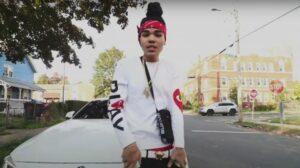 Violence has struck down another young social media star. On Sunday, rapper YNT Juan was shot and killed as he sat in his car in Hartford, Connecticut.

The Hartford Courant reported that the 17-year-old rapper was popular on Instagram with 25,000 followers and 4,000 YouTube views of his videos. His most recent video, “Power Remix,” was released last week.

YNT Juan, whose real name is Juan Bautista Garcia, was low-key, according to one of his friends.

“He was only 17 years old. “He never went live on his Instagram to talk about drama; he only went on there to support his friends or promote his music,” an unidentified childhood friend said.

YNT Juan’s last post before his death was an Instagram story promoting the release of “Power Remix.” His previous projects, “Snakes” and “Detroit,” are also on YouTube and performed rather well.

The young rapper also had an impressive following on his Sound Cloud page.

Since 2020, there has been a troubling trend of young rappers being killed. In November, rapper King Von was shot and killed. Rappers Mo3, Hot Boy Ju, Gonzoe, and TikTok star Swavy have also been killed recently.

YNT Juan’s death marks the 25th homicide in Hartford this year. The city is on pace for one of its worst years for homicide yet. Law enforcement and community leaders have tried to pour resources into lessening the incidence of violent crimes, namely shootings, after a particularly harrowing spring.

In the comments section of YNT Juan’s “Power Remix” video, there is an outpouring of love for him with emojis and wishes to rest in peace.

“I Love you bro, every move I make with my music is for YOU! Again, I love you Juan, Rest in Power,” said one commenter.

The Hartford Crime and Major Crime divisions are investigating the murder and are asking that anyone who has information about the shooting contact their office.