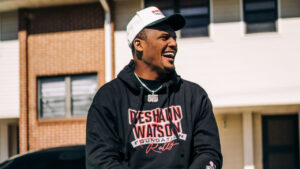 Earlier this year, back in March, BLACK ENTERPRISE reported that National Football League (NFL) player, Deshaun Watson, quarterback for the Houston Texans, had been accused by more than 10 women of sexual assault and/or being inappropriate. Fourteen massage therapists are pressing civil lawsuits against Watson, with the most recent accuser claiming Watson flashed her and rubbed his genitals on her without consent in their session, USA Today reported. The number of accusers has since climbed to 22.

According to Fox 26, in Texas, a Harris County grand jury investigation has been initiated to see whether there is sufficient evidence to bring criminal charges against the Texans quarterback. It has been reported that the Human Trafficking Section Chief for the Harris County District Attorney’s Office, Johna Stallings, has been sending out subpoenas for the investigation.

According to sources with knowledge of the situation there is a Harris County grand jury investigation being used to determine if there is sufficient evidence to bring criminal charges against #Texans quarterback Deshaun Watson stemming from the 22 civil lawsuits filed against… pic.twitter.com/xRADFNry3R

Meanwhile, several of Watson’s accusers have stated that investigators from the NFL, in their interviews regarding the accusations against Watson, have been “patronizing” and “victim-blaming” in their line of questioning.

According to ESPN, in a story that was published last week by Sports Illustrated, NFL investigators Lisa Friel and Jennifer Gaffney—both former prosecutors who are now managing the football league’s personal conduct policy investigations—have spoken with accusers Ashley Solis, Lauren Baxley, and another eight of the 22 women who have filed lawsuits against Watson.

In the story, Solis said that the NFL investigators asked her what she was wearing when she worked with Watson. “She explained that that’s something that she has to ask—which I don’t believe at all,” Solis said, adding that it “honestly really pissed me off.” Solis had described several incidents of sexual misconduct by Watson in the lawsuit, including him putting his penis in her hand.

In a statement to ESPN’s Kimberley A. Martin, the NFL has said that there is “no change to [Watson’s] status as the investigations by the Houston Police Department and the league continue.” They also said that the review of the “serious allegations” against Watson “remains ongoing and active.”

“We are working cooperatively with the Houston Police Department and ensuring that the NFL’s inquiry does not interfere with their investigation.”

Defy The Underworld With This Awesome Hades Nintendo Switch Controller