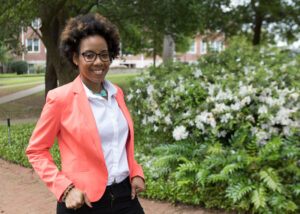 Centenary College of Louisiana is celebrating a milestone at the state’s oldest college after they awarded tenure to a Black professor for the first time in the school’s history.

Andia Augustin-Billy broke a glass ceiling at the school after becoming the first Black professor to be tenured at the school in over two centuries, ABC News reports. The college is 196 years old and can openly admit that tenuring one of their Black professors was long overdue and a reflection of Louisiana’s deep history of racism.

“Structural and institutional and systemic racism has been present ever since the college was founded, largely by enslavers,” school archivist Chris Brown said.

She also takes students on trips to Paris and Haiti, where she grew up and was raised by her missionary parents. Centenary College has a student population that’s 18% Black or Black and another race.

As part of awarding tenure to a Black professor for the first time, the school is dedicated to moving towards a more inclusive culture at Louisiana’s oldest college.

“Any institution that is as old as Centenary, particularly one in the South, must take account of the role that racism played in its history,” Christopher Holoman, president of the Methodist-affiliated college in Shreveport said.

“As we move forward, Centenary is committed to full inclusion of all members of our community and working towards a just society.”

Centenary was among the last in Louisiana to desegregate and didn’t start integrating its first Black students until 1966, KLFY reports.

Fred Bonner II served as Centenary’s first Black professor and admits that the school is burdened with a racist past but said it’s “really trying to move the needle in a positive direction.”