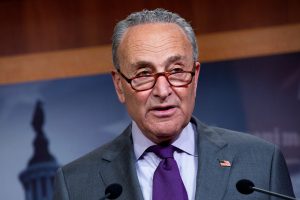 The 69-30 vote for one of the most far-reaching bills in decades to improve and expand transportation systems, high-speed internet, drinking water and school facilities extended a string of victories Schumer has celebrated since becoming Senate majority leader in January.

Working in tandem with House of Representatives Speaker Nancy Pelosi, the 70-year-old New Yorker helped Biden get his presidency off the ground with the March enactment of a $1.9 trillion COVID-19 relief bill.

By midyear a COVID-19 hate crimes measure had also passed, along with bipartisan legislation helping the United States compete against China, especially in technology.

Now comes the harder part, as Schumer plunges his 50-member caucus — exactly half the Senate — into partisan warfare. It will be a drive to hand Biden $3.5 trillion in “human infrastructure https://www.reuters.com/world/us/paid-leave-clean-energy-preschool-democrats-35-trln-plan-2021-08-09″ spending.

Republicans have made clear they will not back the infrastructure bill, which includes funds to fight income inequality and climate change, while expanding social welfare programs. It will hit on a series of hot-button issues in the run-up to the 2022 elections that will determine whether Democrats keep their slim margins of control in Congress.

“A united (Democratic) caucus is going to be absolutely crucial or a significant part of the Democratic agenda is going to fail,” said Jim Manley, a former Senate Democratic leadership aide.

With some maverick Democrats, especially Senator Joe Manchin, poised to pick apart bits, Manley added that Schumer’s “negotiating skills are going to be at a premium in weeks to come.” In all likelihood, he said, Pelosi and Biden will have to scale back some items to win the backing of moderates.

But with all 50 Democratic and independents’ votes needed for victory under a special procedure known as “reconciliation,” they must also be careful to keep influential progressives aboard, such as Senators Bernie Sanders and Elizabeth Warren, who work in concert with a vibrant House progressive caucus.

The battle is expected to rage for months, testing Schumer like no other time in his 40-year congressional career.

At stake this week is a budget measure providing the framework setting the stage for the colossal bill to be tackled this fall.

Other major bills that could surface this fall include a voting-rights measure as well as funding the federal government beyond the Sept. 30 end of the fiscal year.

It is a daunting agenda, but one that even some Republicans say suits Schumer’s frenetic personality.

“He walked into this job with strong relationships on both sides” of the aisle following four years as minority leader, said a former Senate Republican leadership aide, who added, “that allows him to operate in a sphere of good faith.”

The low point in Schumer’s Senate leadership career came in early 2018 when Democrats failed to win concessions from Republican then-President Donald Trump during a budget fight for protecting young immigrants living in the United States illegally.

In protest, Democrats uncharacteristically triggered a partial government shutdown that lasted a weekend before Schumer’s will collapsed, angering liberals.

More than three years later, Schumer was buffeted during the recent roller-coaster $1 trillion infrastructure negotiations. But the result was different.

“He’s had to sit back and watch multiple bipartisan groups come up and fall apart and people telling him to stop waiting around” for a bipartisan deal, said former Schumer spokesman Matt House.

Elaine Welteroth Launches MasterClass for Designing the Career of Your Dreams