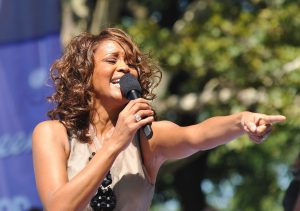 The legacy of arguably one of the greatest singers to ever grace a microphone has an NFT (non-fungible token) to add to her historic career. Once word got out about the collection, the 300 NFTs available sold out within a few seconds.

In partnership with the estate of Whitney Houston, OneOf, a green NFT platform built for the music community, is releasing an exclusive NFT collection.

OneOf created an NFT collection built around a never-before-heard, unreleased song demo that Houston recorded when she was just a 17-year-old up-and-coming artist. The collection is of various rare archival materials, as well as recently produced art. The set is a collaboration with one of today’s most compelling visual artists, Diana Sinclair, who has been hailed as a 17-year-old crypto phenomenon. She has re-imagined and re-invigorated these photographs for contemporary audiences.

The Whitney Houston collection not only celebrates and acknowledges her legacy, but it is being used as inspiration for today’s young talent and the promising future of the world of music, art, and technology.

✨The First Ever Whitney Houston DROP IS LIVE!✨ Grab a piece of music and NFT history with an NFT from Whitney’s debut collection—”Always Love You”. Only 300 GOLD editions for $17 are available NOW. You don’t want to miss this! Only on https://t.co/0k5Gez7Axz! @dianaesinclair pic.twitter.com/dCDe93kqfN

This hidden piece of history debuts on Dec. 1, 2021. A never-before-heard demo recording of Houston will be announced and uncovered during OneOf.world at Miami’s Art Week. Only one collector will be able to win personal access to the recording in their OneOf Vault, along with a digital video created by the 17-year-old Sinclair.

The Whitney “1 of 1” NFT will be the first NFT in the “OneOf Iconic” series to be unveiled at OneOf.world during Miami Art Week.

OneOf announced in a Twitter post that the Houston NFT collection sold out in a few seconds.

Well, that was fast, sold out in a few seconds… Congrats to all the @OneOfNFT fam that got one!! https://t.co/4WyZMiMFNZ