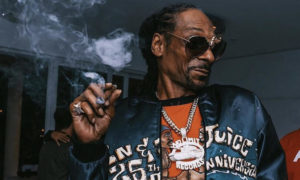 Calvin Broadus, who we know by his more popular moniker Snoop Dogg, has been making his rounds with his commentary with Kevin Hart for The Tokyo Olympics but he also has a few choice words for some professional sports leagues!

In an exclusive interview with The New York Times, the cannabis-loving businessman and artist talked about the lack of Black team owners, specifically in the National Basketball Association (NBA) and the National Football League (NFL). The disparity with the percentage of Black players in both leagues in comparison to the owners is something that needs to be changed according to Snoop Dogg.

Snoop says, “I mean, you would think that those businesspeople up top would say: “You know what? It’s time to change the world. We’ve got to stop treating Black people like they’re less. They’re always the ones who do the hard work, the groundwork, but we never cut them in.”

He continues, “Like, why don’t we have an owner in an N.F.L.? That’s just racist. Period, point-blank. We need to own an N.F.L. team. We got one half-owner in the N.B.A., Michael Jordan. But the whole league is 90 percent Black. So we still the slaves and they still the masters. That’s why in the music game, we took the initiative to say, [expletive] that. We’re the masters, and we own our masters. We’re going to negotiate with you the way we think it should be. We changed that industry years ago, with our mentality of having our own labels.”

In the interview, Snoop also mentions some of the people in the industry who have influenced him to become a better businessman. Contemporaries like Master P, Dr. Dre, Sean Combs, and Russell Simmons. He even acknowledges legends in the game, Quincy Jones and Charlie Wilson as influencers. He also acknowledged that the trust he has with his wife, Shante Broadus, propelled him to make her his official manager.