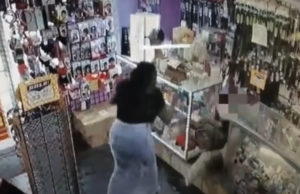 Police are searching for a woman who was seen on video attacking two elderly store owners after her card declined an $11 purchase.

David Jo is demanding justice for his parents after they were brutally beaten by an enraged woman inside of their Chic Beauty Supply in West Cleveland, News Channel 5 reports. Cellphone footage captured by the injured store owner shows the couple arguing with the woman over a declined purchase worth $11.85.

“All I am trying to do is get my items,” the woman said in the video. “It’s not cleared. We cannot give you anything ‘cause it’s not cleared,” the couple replied.

“She tried to pay for these products and the card was declined,” Jo recalled. “It was one of those pre-paid credit cards and she put the pin numbers in and was declined and she was not happy.”

But instead of calling her bank or just using cash, the unidentified woman began trashing the store, knocking over display cases before physically assaulting the two owners.

“My father was bloodied up pretty bad. When I saw my mom today, she was crying, she was upset, she had bruises all over her body,” he said of the injuries his parents sustained.

Cleveland police are searching the woman and looking to arrest her for felonious assault and vandalism, KSBY reports

Jo said despite the violent attack, his parents returned to work Monday to clean up the store and run their business. But he is worried for their safety while their attacker walks the streets.

“I need to find this person and make sure she is held accountable for the damage she has caused,” Jo said.