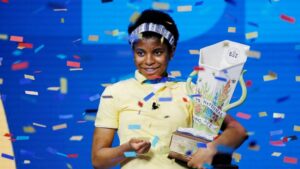 First she awed the world as this year’s Scripps National Spelling Bee champ, now she’s on the cover of Sports Illustrated Kids for a new award—SportsKid of the Year.

“I’d be reading a book and be like, What’s this word?” she told SI Kids. “So I’d go to look it up into the dictionary. And you know how they have like the links that lead you to the next word? Yeah. That was my downfall. Suddenly a quick run to the dictionary for a minute turns into diving through whole histories of countries.”

While her love for words earned her a major award, including a full scholarship to Louisiana State University, her talent goes beyond just spelling.

Zaila is also skilled on the basketball court. She’s been featured in Guinness World Records several times for her dribbling skills. She set new records for the most bounce juggles with both three and four balls in a minute and the most bounces with four balls in 30 seconds. She tied the record for most balls dribbled at one time, which was six.

On the cover of Sports Illustrated Kids, she’s seen dribbling three balls at once while giving the camera an easy smile.

Zaila Avant-garde is the 2021 SportsKid of the Year!

A dazzling dribbler, a spectacular speller and a scintillating scholar: @Basketballasart can do it all https://t.co/Flq6IhUlKG pic.twitter.com/MTp9ntCsch

Zalia started hooping at the age of 5. She’d dribble for hours at a time, often while listening to an audiobook. Over time, she started adding balls.

When the ninth grader plays on the court with a team, she loves “to pass and give assists because I love to get my other teammates involved and just make them happy and make their days go better,” the point guard said.

After winning the spelling bee, the talented teenager was given a tour at the Johnson Space Center in Houston. While there, she met astronauts and landed a spaceship simulator. She sees NASA as one of the places she imagines herself working.