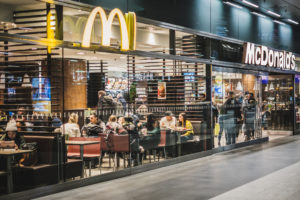 Reuters – A McDonald’s Corp franchise in Oakland, California, has agreed to take steps to protect workers from COVID-19 to settle a lawsuit claiming managers gave employees dog diapers and coffee filters to use as face masks.

The franchise said in the settlement announced on Thursday that it would provide employees with paid sick leave, masks and gloves, maintain social distancing, regularly disinfect surfaces and require workers with COVID-19 symptoms to stay home.

The franchise will also establish a worker safety committee, requiring the owner and managers to meet monthly with employees to discuss ways to maintain a safe workplace.

Fight for $15 and a Union, a labor organizing group that is involved in the lawsuit, said the safety committee was the first of its kind and would create a national model for giving more leverage to workers.

The company denied wrongdoing, and it was not clear if the settlement included a financial component.

The settlement comes amid a surge in COVID-19 cases in the United States due to the spread of the highly contagious Delta variant. An increasing number of companies are requiring workers to be vaccinated, or considering doing so, in response to the increase.

McDonald’s on Wednesday said it will require its U.S.-based office workers to be vaccinated.

Michael Smith, the Oakland franchise’s operator, said in a statement that the restaurant began implementing the measures outlined in the settlement more than a year ago.

“We will continue to take all necessary steps to ensure that our stores remain as safe as possible,” Smith said.

Last week, McDonald’s agreed to implement various protective measures at a corporate-owned restaurant in Chicago to settle a lawsuit claiming the company had created a “public nuisance” by failing to take steps to protect workers.

McDonald’s denied wrongdoing in that case. The company has said that it has implemented dozens of safety measures at U.S. restaurants.