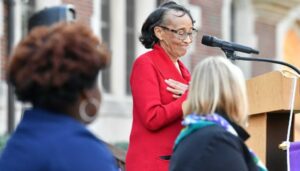 On Nov. 17, the school unveiled a tribute to Swift commemorating the 50th anniversary of her groundbreaking graduation.

According to the Associated Press, the women’s college held a ceremony for its pioneering alumna, revealing a bench and plaque on the campus lawn just outside of Atlanta in downtown Decatur, GA. Swift, now 72, said she was thrilled with the honor.

When she arrived on campus as a scholarship student in the fall of 1967—10 years after the Little Rock Nine integrated their high school campus in Arkansas–Atlanta and the rest of the Southeast were still hotbeds of violence and discriminations against African-Americans.

This seemed especially true in newly integrated spaces: six years prior to Swift’s enrollment, Charlayne Hunter-Gault and Hamilton Holmes faced angry protestors as they became the first two Black students at the University of Georgia. The first Black woman to enroll at Agnes Scott, Gay Johnson McDougall, had arrived on campus two years before Swift, but did not complete her degree at the school.

McDougall attributes hate mail and feeling “profoundly lonely” as factors that eventually pushed her to leave the school.

While she chose not to live on campus because she was unsure of how she’d fit in, Swift says she did not experience violence or harassment during her time at the school. She also remembers feeling the support of the Black staff on campus, who she says told her they were proud of her.

After majoring in Spanish, Swift would go on to teach in the Atlanta Public Schools System and became the mother and grandmother of Agnes Scott students.

Swift has been invited to speak to students at her alma mater on several occasions and also had the honor of having a lounge on campus named after her.