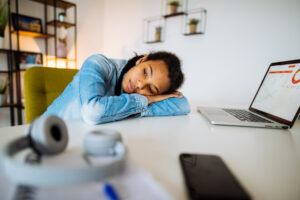 When it comes to student loan debt, hundreds of Black borrowers equate the money owed to “Jim Crow” as it makes racial inequality more intense.

According to a new report by The Education Trust, those Blacks report that policymakers have disregarded the racial and economic evidence of inequality in student loan debt with most contending that erasing all such debt is the best way to solve the ongoing problem.

The study reported by CNN focuses on the views and experiences of roughly 1,300 Black borrowers. Many reported the loans were not arranged for Black Americans and disturb their quality of life and mental health.

“They described their growing balances under IDR (Income-driven repayment ) plans as ‘shackles on their ankle’ or ‘like Jim Crow,’ where the debt ensures that they will never have full freedom,” per the report.

The concerns by student loan debtors come as that expense has reached $1.73 trillion and remains a lingering problem for both existing and past student borrowers.

Among the study’s top findings were that most Black borrowers do not believe student loans are “good debt.” They deem income-driven repayment plans a lifetime debt sentence, adding limiting student loan debt cancellation harms Black borrowers the most. A greater part of them would prefer the government cancel their loans instead of offering lower interest rates or free tuition.

Jonathan C.W. Davis, a senior research associate at The Education Trust and the report’s co-author, said the study’s goal was to point out how anti-Black racism, disinvestment in higher education, and the inequitable distribution of wealth in the country has a placed a burden on Black borrowers.

Leaders from The Education Trust, a national non-profit that aims to close opportunity gaps that disproportionately affect students of color and students from low-income families, assert that policymakers need to be held accountable.

“It’s an attempt for us to help shift the conversation away from the individual decision-making of borrowers themselves and situate blame where it should lie, which is with the broken systems and policies that have led to this crisis,” Davis told CNN.

The report found the idea that student loan debt provides a way for gaining credentials that lead to higher incomes, greater wealth and social mobility is often not generally for Black borrowers.

“The framing of student loans as ‘good debt’ ignores the experiences of Black borrowers, who have less household wealth than their white counterparts and often have no option but to take out student loans to pay for college and the associated costs of attendance,” according to the report.