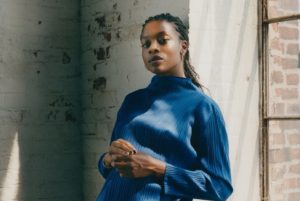 Candyman director Nia DaCosta became the first Black female director to debut a weekend movie at the No. 1 spot at the domestic box office.

Candyman, filmed by Universal/MGM, grossed $20.4 million in its opening weekend, beating its original projection of $15 million. The movie is the second-highest-grossing three-day domestic weekend box office for a Black female movie director behind Ava DuVernay‘s Disney movie A Wrinkle In Time.

According to Deadline, Little ($15.4M, dir. Tina Gordon), starring Regina King as a rude and angry boss who gets switched into a kids body; The Photograph($12.1M, dir. Stella Meghie), starring Issa Rae as a young girl trying to find out more about her mother’s life and Queen & Slim ($11.89M, dir. Melina Matsoukas) starring Daniel Kaluuya, round out the top five.

The original Candyman was based on a short story by Clive Barker centered on an urban legend about the ghost of a murdered slave who reappears and goes on a murderous rampage. DeCosta’s version was made by a Black creative team featuring Jordan Peele, who made Get Out and Us with Universal.

The film studio believed Candyman would attract Black audiences, but the movie attracted a more diverse audience. According to IndieWire, the studio’s audience survey tallied 37% Black, 30% white, 22% Latino, and 5% Asian.

Before Candyman, DaCosta directed two episodes of Netflix’s Top Boy in 2019 and worked as a writer on the HBO series Industry. DaCosta is a graduate of the Tisch School of the Arts at New York University and the Royal Central School of Speech and Drama in London.

DaCosta’s film debut was Little Woods, which dealt with several highly debated topics such as access to healthcare, poverty, and the criminal justice system.

Peele has made a jump into the horror genre following the success of Key and Peele, a sketch comedy show featuring Peele and Keegan-Michael Key.

Mythic Legions Is Bringing Their Figurine Universe To Video Games