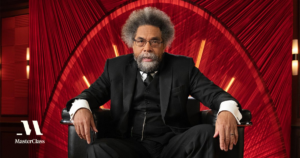 Launched last week, West’s personal philosophy class has already been rated a 4.7 out of 5 stars. The Princeton and Harvard alumnus uses his new digital classroom to virtually teach students how to become deeper thinkers by applying critical thinking in everyday interactions.

In the 15 lesson plans, the outspoken social critic offers his insight on topics ranging from humanity, love, courage, and even death. The acclaimed Race Matters author has built a successful career through deep discussion on race, culture, and society through a philosophical lens.

In his class, West teaches the early history of Western philosophy while sharing ideas from other deep thinkers in order to teach students how they too can think like a philosopher.

“Philosophy challenges us to see differently, feel more deeply and act more courageously,” West said. “My hope is that members will develop a new lens through which to view themselves and become more conscious human beings and that they can become introspective of their own journey and how they interact with others.”

West’s new MasterClass comes after he resigned from Harvard in July citing racism and discrimination at the notable school, NPR reported. His departure came after a months-long battle over him being offered tenure, something that most professors of his stature typically receive.

When quitting his professor role at the school, West posted his scathing resignation letter on Twitter for the world to see.

This is my candid letter of resignation to my Harvard Dean. I try to tell the unvarnished truth about the decadence in our market-driven universities! Let us bear witness against this spiritual rot! pic.twitter.com/hCLAuNSWDu

Now’s he’s continuing his love for philosophy and education on a bigger platform that allows him more reach and uncapped earning potential. MasterClass is also elated to have a philosophy course from the first African American to graduate from Princeton with a Ph.D degree in philosophy.

“As one of the world’s most provocative thinkers and intellectuals, Dr. West has challenged humans across the world with what it means to be human,” said David Rogier, CEO of MasterClass.

“His class offers a new critical way of thinking that will open doors to new ideas and heighten meanings for all members who want to better understand their relationship with humanity and purpose on Earth.”