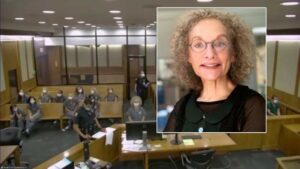 A Florida teacher who was recently honored as teacher of the year was arrested last week after authorities said she struck a pupil in the face after the student confronted her about using the N-word in class.

According to USA Today, Caroline ‘Melanie’ Lee, 60, who had been selected as Teacher of the Year at Darnell-Cookman Middle/High in Jacksonville, was arrested Friday and charged with child abuse. She was placed in Duval County Jail and made her first court appearance Saturday.

Lee requested to speak to the student privately in her classroom and struck her in the face causing the young girl’s nose to bleed, according to a Duval Schools Police report. Witnesses told the police officer who responded that the incident started while the two discussed an Instagram post last week.

Last Wednesday, Duval County Public Schools’ Instagram account posted a photograph of Lee, congratulating the teacher because she was just awarded Teacher of the Year at the school. Several comments on the post questioned why she won, wondering if Lee was the same teacher who had been heard using the N-word while teaching. There were also allegations of Lee committing microaggressions against students, according to the report filed with police.

The original Instagram post has since been deleted. Lee admitted to a police officer Friday that she used the N-word while reading the novel Of Mice and Men to her class.

A student, who was not named due to her being a minor, commented on the post about Lee using the N-word in her classroom. The student wasn’t a pupil of Lee’s, so she asked to speak to the girl in-person about the comment she posted. The student told police that when she arrived at the classroom, Lee reached across the table and hit her several times.

Lee confirmed the dispute in the arrest report but denied hitting and causing physical harm to the student. She stated after seeing the Instagram comment that she wanted to talk to the student because she thought her response was “a threat to kill her,” though s Lee “did not feel the need”  to report it to the school.

According to the Associated Press, Duval Schools Superintendent Diana Greene wrote in a statement that the charges were “beyond disturbing” and that school officials will cooperate with all investigations.

“What is alleged should never occur—ever—especially in a school setting,” Greene said. “I have no tolerance for adults who harm children, especially adults in a position of trust.”

“We are building for the metaverse” says Meta VP Nick Clegg