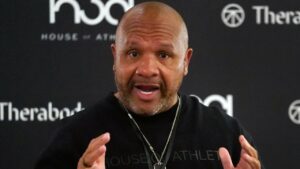 Hue Jackson is following up his NFL coaching position with a head coach position at the HBCU Grambling State University.

The former coach to the Oakland Raiders and Cleveland Browns will be returning to the stadium but on the college ranks. The popular historically Black college is following in Jackson State’s footsteps after they acquired 2x NFL champion Deion Sanders as its head coach, Football Scoop reports.

Now Hue Jackson is reportedly the top prospect to fill the coaching vacancy at Grambling. Negotiations have reportedly increased in the last 72 hours, sources say.

Jackson was reportedly in talks with Alabama State to take on their head coach position but it was given to ASU alum Eddie Robinson Jr. In the last year, Jackson has served on Eddie George’s inaugural Tennessee State University staff. He coached the quarterbacks and was an offensive coordinator.

The 56-year-old initially got his coaching start on the collegiate level back in the late 1980s before transitioning as an NFL coach in 2001 and remaining a coach through 2018. Jackson spent one year as the Oakland Raiders head coach and three with the Cleveland Browns.

The Browns were 3-36-1 during his tenure as head coach, including an 0-16 season in 2017, NBC Sports reports. He also served as an assistant coach with the Cincinnati Bengals, Raiders, Washington Football Team, Atlanta Falcons, and Baltimore Ravens.

If hired, Jackson would be replacing Broderick Fobbs who was fired from Grambling State in November following eight unsuccessful seasons with the Tigers. Linebackers coach and special teams coordinator Terrence Graves has served as the interim coach while the university searches for a permanent replacement, 247 Sports reports.

“Earlier today, I informed head coach Broderick Fobbs of my decision to make a change in leadership of our football program,” Grambling State athletics director Trayvean Scott said of Fobbs’ termination. “Broderick Fobbs is one of the finest human beings I have had the pleasure to meet in this industry and he has been a tremendous role model and mentor to our young men.”

If the reports are true, Jackson would become the latest in a series of big wins for the sports departments at HBCUs across the country.

Interracial Couple Stopped By Fake Police While Looking At Decorations