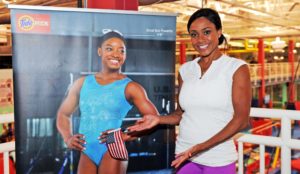 Olympic gold gymnast Dominique Dawes who dominated the sport in the ’90s, is applauding Simone Biles for putting her mental health above the pressure brought on during the Tokyo Olympics.

Many were shocked when Biles withdrew from the team final on Tuesday and admitted it was to focus on her mental well-being. On Wednesday, former Olympian Dawes praised Biles’s decision.

“What I love about Simone Biles is she is listening to her inner voice,” the three-time gold medalist told WTOP. “That is something that we were not allowed to listen to as a former Olympian. Back in the 90s and early 2000s, we were taught to shut off what was going on inside … and to not believe it.”

Biles made an early exit from the Olympics after a shaky vault performance. A day before the announcement, she shared an Instagram post expressing how she was feeling pressure to compete well.

“It’s like fighting all those demons and coming out here. I have to put my pride aside. I have to do it for the team,” Biles said. “And then at the end of the day, it’s like ‘you know what, I have to do what is right for me and focus on my mental health and not jeopardize my health and my well-being,’” she said.

But her bold decision is one Dawes said she also faced but didn’t have the same freedom at the time to do.

“I wanted to quit all the time, and even at the Olympic trials in 2000, I was done after day one. I told those that were around me: I quit. I don’t want to go any further,” Dawes recalled.

“But yet I wasn’t allowed to make that decision for myself. We were very much robots back then, and we were programmed, and we were always to do what we were told.”

Dawes said it took her years to overcome the emotional and mental trauma she sustained from years in professional sports.

“Now you can allow the athletes to speak for themselves,” Dawes said. “It’s OK to say no. It took me until I was nearly in my 30s to be able to say no to environments that I didn’t want to be in.”