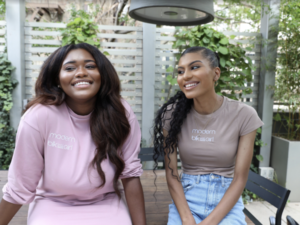 After crossing paths on the Clubhouse app, these two Black women investors came together to teach other women how to invest. Now business partners, they’re on a mission to get 500,000 women of color into the market through their platform, “Modern BLK Girl.”

Like many who were quarantined during the pandemic, Tiffany James and Sharlea Brookes found social refuge in the audio-only app, Clubhouse. While the app offers entertaining conversations for any niche, James and Brookes spent their time in “rooms” focused on investment.

The self-taught stock market enthusiasts often found themselves in conversations dominated by men, but that didn’t stop them from hopping on “stage” and sharing what they’d learned in their personal investment journeys.

“I felt like these conversations the gentleman had in Clubhouse didn’t have enough women in them. And there were definitely no Black women,” James said. “So, I would go onto stages in front of hundreds, sometimes thousands of people and question some of the guys about things that are happening in the market, but also provide great insights, and that became a thing for me. My afternoons would be on Clubhouse, talking about market fundamentals and getting started in the market.”

It soon became clear other women in the room wanted to hear more.

James reached out to Brookes and the duo eventually launched their own Clubhouse financial group, which at one point, racked up more than 100,000 followers.

“I was most interested in the fact that it was another Black woman speaking on the topic and she reached out and was like, ‘Hey, I have this vision about teaching Black women investing,’ and I was surprised that I was so drawn to the idea because I didn’t know [Tiffany] at all at the time.”

The two investors weren’t strangers for long after learning they shared the same hometowns and alma mater, Northwestern University.

From a “room” on Clubhouse, Modern BLK Girl grew into a stand-alone wealth building platform for women of color with a mission to educate women about how money works and help close the wealth gap amongst genders across the globe.

While they’re not licensed financial advisors, with deep research on the market, Brookes and James offer classes on various investment topics—including the stock market, Bitcoin and passive income.