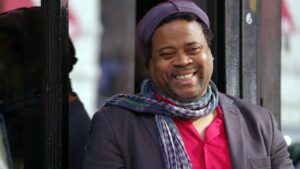 “The Black Rock Coalition is shocked, saddened and absolutely devastated with the news that our brother, friend and co-founder Greg Tate made his transition earlier today.

“Greg, who along with Vernon Reid, Konda Mason and other musicians, journalists, and other visionary, well informed Black rock n roll heads, started the Black Rock Coalition in 1985 as a means to combat misinformation about the true of this rock n roll thing of ours, confront the subtle and overt racism that has, and continue to plague the music industry, and to champion those of color who carry the banner proudly and without apology.”

According to NPR, Tate, born on Oct. 15, 1957, spent his teenage years in Washington, D.C., where his interest in music started. He co-founded The Black Rock Coalition when he moved to New York City. He also started a group, Burnt Sugar, an avant-garde orchestra that mixed elements of free jazz and fusion, R&B, funk, and contemporary classical music, pioneered by improvising conductor Butch Morris. In September, the collective had just released its latest EP, Angels Over Oakanda.

Tate started at The Village Voice in 1987, where he was a longtime staff writer who penned Black culture for the storied alt-weekly. After leaving The Village Voice, Tate wrote for various publications, including Rolling Stone, the BBC, Down Beat, and many more. His last article was published in September in The Nation, examining the current Black cultural landscape through the lens of the book Afropessimism, by Frank B. Wilderson III.

He also published his first book in 1992, Flyboy in the Buttermilk: Essays on Contemporary America.

According to The Black Rock Coalition, he leaves behind his daughter Chinara, his grandson Steven, brother Brian, and sister-in-law Maureen.