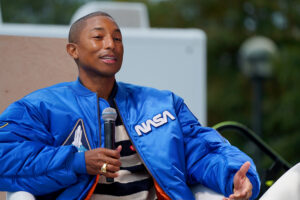 According to the Virginian-Pilot, university president Javaune Adams-Gaston also named Williams an honorary member of the Spartan Legion Band, bringing the musician to tears. He reminisced on hearing about the university’s marching band as a child: “I wanted to be able to make people feel the way Norfolk State’s band made me feel.”

Pharrell encouraged the newest graduates to act as “the emerging majority” and support local Black businesses. He said, “Don’t wait until Election Day. Vote with your wallets today, tomorrow and the next day. Does the business owner look like you? Shop there.” Williams also urged the graduates to focus on changing outdated language, including the word “minority.”

The Virginia native didn’t attend NSU for his education, but he expressed how much NSU had impacted his life’s work and story, and continues to do so. He said he was honored to be part of a community that recognizes its past local heroes, such as Willis Augustus Hodges, who was born in 1815 on a farm in Blackwater in Princess Anne County.

His older brother was sent to jail after being accused of writing free papers for slaves. He escaped, and was chased by an angry mob to Canada. In 1836, Hodges published a weekly anti-slavery newspaper, The Ram’s Horn, and has since been recognized as an activist. Williams noted that Hodges was part of the Underground Railroad, and that his story still holds power, as do locals in Hampton Roads.