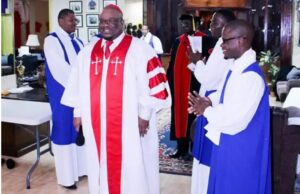 Kevin O. Smith and 41 members of his St. James Pathways International Kingdom Restoration Ministries near Montego Bay have been arrested after two people were killed in what the church’s pastor called “a Roman Catholic sacrifice.”

Jamaican police was alerted by a woman who had been physically harmed for disobeying the church, The Sun reports. Authorities say the ritual took place after approximately 50 members of the congregation had participated in two days of fasting in preparation for a “Noah’s Ark” redemption journey. They had been told by Smith, the church’s leader, to arrive dressed in all white, leaving their phones at home, wrapped in aluminum foil.

According to sources, Smith believed the church members were the victims of “bloodline pollution cause by witchcraft,” which was causing “sex dreams”; he intended to purify them through a bloodletting ceremony. Before police entered the building, one man and one woman had their throats slashed by the pastor as he was assisted by another member of the church, believed to be a police officer.

“A 39-year-old office worker called Tanecka Gardner was the first to be sacrificed by having her throat cut,” a source told The Sun. “Then a man was ordered to strip naked and died in the same way to get the ‘impure’ blood out of his body.”

A third follower died in an exchange of gunfire with police officers. Upon entering the building, authorities found several animals and naked men who were being prepared for sacrifice as well. Three more congregants were taken to the hospital, one with life-threatening injuries.

Smith was held for questioning along with ten men and 31 women who were at the church during the ceremony. Fourteen children who were also present have been taken into protective care. Police are currently investigating allegations that Smith was also abusing some of the boys who were closest him.

“There is huge concern that influential people — including other local police officials — were involved and that this may have happened before and gone unreported,” a source told The Sun.

According to Mirror, within two hours of his arrest, believers had raised over $30,000 to cover his legal fees.

What Scandal?! Dave Chappelle Sells Out London Show, Hints At US Tour