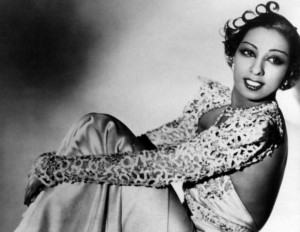 Baker’s cenotaph was carried down a red carpet that stretched from the Luxembourg Garden to the Pantheon. Military officers carried the cenotaph that held Baker’s military medals and contained soils from her birthplace in Missouri, France, and from her final resting place in Monaco.

During her lifetime, Baker was hailed for her talent as an entertainer and her service as an anti-Nazi spy and civil rights activist. French President Emmanuel Macron paid tribute to Baker in a speech praising her life and career that moved communities all across the world.

In addition to becoming the first Black woman to receive the notable honor, Baker was also the first American-born citizen and the first performer to be immortalized into the Pantheon, AP News reports. Among the 2,000 guests in attendance were nine of Baker’s 12 children that she had adopted from all over the world.

During the ceremony, they played Baker’s song “Me revoilà Paris” (“Paris, I’m Back”) before the French Army Choir performed the ‘French Resistance’ song before an excited crowd. A light show displayed on the monument where Baker could be heard saying.,

“I think I am a person who has been adopted by France. It especially developed my humanist values, and that’s the most important thing in my life.”