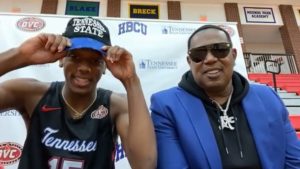 After making sure his son started his collegiate basketball career at an HBCU (historically Black colleges and universities), hip-hop businessman Percy “Master P” Miller says his son will be transferring from Tennessee State University.

According to The Nashville Tennessean, Master P says his son, Hercy Miller, will be transferring from the Tennessee State University basketball program because he feels that the school lacks the medical resources within the athletics department. Based on the resources other non-Black schools have access to, he feels TSU can’t compete with other universities with sports programs.

At the first game of the season for the TSU basketball team on Nov.9, Miller suffered a hip injury. Master P feels his son did not receive the proper medical attention needed after suffering the injury in the game against Alabama A&M. An improper diagnosis almost led to the end of Hercy’s playing career, he said.

Miller was shut down for the season last week on Nov. 30. He averaged 10.2 minutes in six of TSU’s first seven games and averaged 2.0 points and 0.8 rebounds per game.

“We’ve got a great program at Tennessee State, we’ve got great people, we loved the culture, we just don’t have enough trainers,” Master P said. “We don’t have enough medical people to take care of what needs to be taken care of. We don’t have the technology that the Dukes and all these major universities have. An injury like this could have been prevented.”

Master P also stated that he does not blame the medical staff at TSU but condemns the disparity in the medical resources between major white universities and HBCUs on an overall lack of funding.

Like any concerned parent, Master P took Hercy to a specialist to look at the injury.

“The specialist said if we would have waited any longer he probably wouldn’t have been able to play basketball anymore because next his ACL was going to go out and all other kinds of injuries,” Master P said.

Master P said that his son had returned home to start rehabilitating the injury and is open to returning to the Tigers if changes are made.