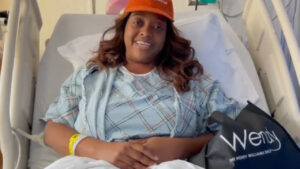 After previously announcing that Sherri Shepherd would be returning as guest host of The Wendy Williams Show comes word that Shepherd did not host the show Monday after undergoing emergency surgery.

According to Deadline, Shepherd had emergency surgery for appendicitis and did not appear on the talk show as scheduled. A spokesperson for The Wendy Williams Show stated that previous special guest host Michael Rapaport filled in for Shepherd. Reportedly, Shepherd is planning to make an appearance before the cameras later in the week.

“Due to appendicitis, Sherri Shepherd underwent an emergency surgery yesterday,” Shepherd’s publicist said in a written statement to Deadline. “The procedure was successful, and Ms. Shepherd is doing fine and resting. She is absolutely devastated that she will not be able to guest host The Wendy Williams Show today, but she is following doctors’ orders and expected to make a full recovery. Thank you all for understanding and respecting her privacy.”

From her bedside, Shepherd took to Twitter to also acknowledge the news.

If you watched the @WendyWilliams show today, you saw the news about my emergency surgery. Thanks to @MichaelRapaport for stepping in for me at the last minute! And while I’m mad I didn’t meet @NaomiWWE in person yet, Jeffrey did!

On Monday, after having the emergency appendectomy, Shepherd returned to Twitter to announce that she, indeed, will be making an appearance on The Wendy Williams Show after all.

Thank you for your love & well wishes. I had an emergency appendectomy last nite. I am feeling much better today & plan on being on The @WendyWilliams Show tomorrow with the tea!

Three months ago, the show’s official Instagram account revealed Williams had tested positive for COVID-19. TMZ also reported that Williams voluntarily admitted herself into a New York City hospital for a psych evaluation. The hospitalization came after the talk show host’s COVID diagnosis was confirmed.

The latest news coming from The Wendy Williams Show camp last week is that the controversial talk show host won’t be making a return until February 2022—at the earliest.

NYDIG raises $1B in funding, valuation now $7B