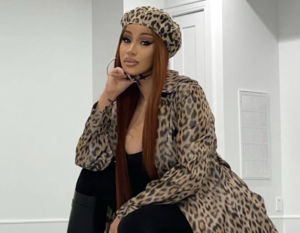 Cardi B spoke up for a group of Black women at a Miami club after the ladies told her that security wasn’t allowing “sisters” in.

Footage of the “Bodak Yellow” rapper talking to bouncers on the women’s behalf at E11even, a famous Miami strip club, circulated online. Cardi was spotted with her husband Offset entering the E11even when the unidentified woman stopped the rapper to tell her what happened.

She explained to Cardi that security denied them entrance to the hotspot because she and her crew were Black. The woman also revealed that her husband “played football,” and they could afford a table if necessary.

”Hey Cardi, they not even letting the sisters in tonight, girl, at the front door. My husband plays football, and they not letting us in,” she continued. “We couldn’t even buy a table.”

Cardi graciously approached the woman, and after she heard their story– she then rolled up to the bouncers, saying, “Y’all need to let some Black women in here.”

“Let the Black women in here. … Security, let them in.”

The bouncer never addressed the women but asked the rapper, “Who do you want in?”

The bouncer informed the “I Like It Like That” emcee that he would allow the group to enter E11even, but he wanted her to go in first.

It was never confirmed if the women entered the spot.

E11even, according to Trip Advisor, has its fair share of negative reviews for being discriminatory. The “upscale show club” boasts 20,000 sq. ft. but doesn’t necessarily tout itself as an overpriced strip club.

In 2010, Miami New Times reported that a Latina sociologist went undercover as a coat check girl at a club to get the scoop on race dynamics in the nightlife world. “Gender, dress, race, and nationality” served as criteria for entrance in Miami clubs.

Even minority bouncers buy into the notion that Black and Latino clubgoers bring down the value of highbrow nightclubs.

In 2012, Katuschca Jubuisson filed a lawsuit against Arkadia Lounge and the Fountainbleau Hotel after she and a group of women were left in the lobby of the spot as they watched white women enter in droves. Ironically, a security guard reportedly told them they couldn’t enter the club because Jubuisson was Black.

”I don’t think that you’re going to get in because you are black,” he said.

Jubuisson told NBC 6 that she and her friends watched only white women enter the club for over an hour in the lobby.

“Oh, I definitely know I didn’t get in because I am an African-American,” she said. “It really sickens me because of the fact that I have given plenty of money to the Fountainebleau.”

Although the hotel tried to rectify the situation, the women proceeded with the lawsuit against Fountainbleau and its nightclub.

Jodeci Is Back Together Under New Management